My house was built in 1951. This humble, little, house was built on a third of an acre, back when families wanted big yards outside and didn’t mind small rooms inside. We bought it back in 2008. The real estate listing had a lot of incorrect information on it, which worked in our favor because it made the price lower than it should have been. In fact, the information is still wrong, last time I checked. Still, the house being that old, we have done quite a number of renovations on it here and there, as time and money have allowed.

There were plenty of things that had already been brought up to code/modernized before we bought it, and a few we had to do ourselves. For example, the windows were all single-pane, crank style windows. We got them replaced right away. Underneath the dingy carpet was some beautiful hardwood; we think maybe oak. We restored it the best that we could before we moved in. We had a breezeway between the garage and the house that my husband closed in and made into a home entertainment room. We had solar panels installed a few years ago.

When our neighbor across the street was still alive, she had told us that the trees in our front yard had been blessed by a priest. The trees are younger than the house, so I wonder which owner had them planted and blessed. In our backyard, there were a few citrus fruit trees that were just barely hanging on. With a little care and some water, those citrus trees still continue to give us lemons, oranges, and grapefruit year after year. We’ve planted four other fruit trees in the time we’ve lived here. My favorite: the nectarine tree.

We have a bathroom (with a shower and everything) in the garage, which seems odd, but it’s a great conversation piece. It seems so out of place, but the brick matches all the other bricks on our house and yard walls. It’s going to undergo a major remodeling this summer.

My favorite part of my house is the fireplace. It’s a really nice focal point in the living room year-round and provides a cozy atmosphere in the fall and winter. The bricks are quite unique, as I’ve never been able to find anything like them anywhere on the internet. The brickwork was done really well, and maybe a previous owner cleaned them, because there really wasn’t too much soot from the fireplace on them. We use our fireplace quite a bit in the winter, so I do notice a little bit of soot has begun to accumulate now. Back in the day, the mantel likely held family photos and things like a mantel clock and candles. Now, it holds our flat screen TV (rather perfectly–within an inch of the ceiling), as well as some framed family photos, and the urn with my brother’s ashes.

My least favorite part of the house is that I don’t have a dishwasher. They weren’t that common back in the early 1950s, and none of the other owners ever remodeled the kitchen. So, my cabinets and counters are all rather shallow and will not hold a dishwasher. Bummer. That’s going to be our biggest (and most expensive) renovation/remodel, but I will not rest until I have a dishwasher. That probably won’t happen for another three or four years. So for now, I continue to wash everything by hand. It feels old fashioned and can be a pain, but it’s usually a mindless chore that I’ve come to accept.

Our garage is surprisingly large for the era in which it was built. It’s a 2-car garage that also has a utility room in the back, where we’ve set up our laundry room and an extra pantry/storage. The brickwork matches that of the house, so we’re fairly certain that it was all part of the original layout.

In the garage, along the edge of a tall cabinet, there are marks recording the height of two of the original occupants of this house: Gary and Betty. On a cement path in the backyard, there’s a hand print made by each of them, with the number ’51, pressed into the cement. It’s so neat to think about them as kids, pressing their little hands into the wet cement, and then see as they grew up on the height chart. The last record is Gary’s, at 5′ 8″ and dated October 27, 1957. Similarly, I’ve been recording my children’s yearly growth on a door jamb in the hallway. I’ve always wondered if my daughter’s room was once Betty’s and my son’s was once Gary’s. I wonder whatever happened to them.

In a different part of the backyard, there’s another path with the names Violet and Corina, and the date August 15, ’00 written in the cement. I wonder who they were and how long they lived in this house. What happened to them? Which one of them washed the dishes? 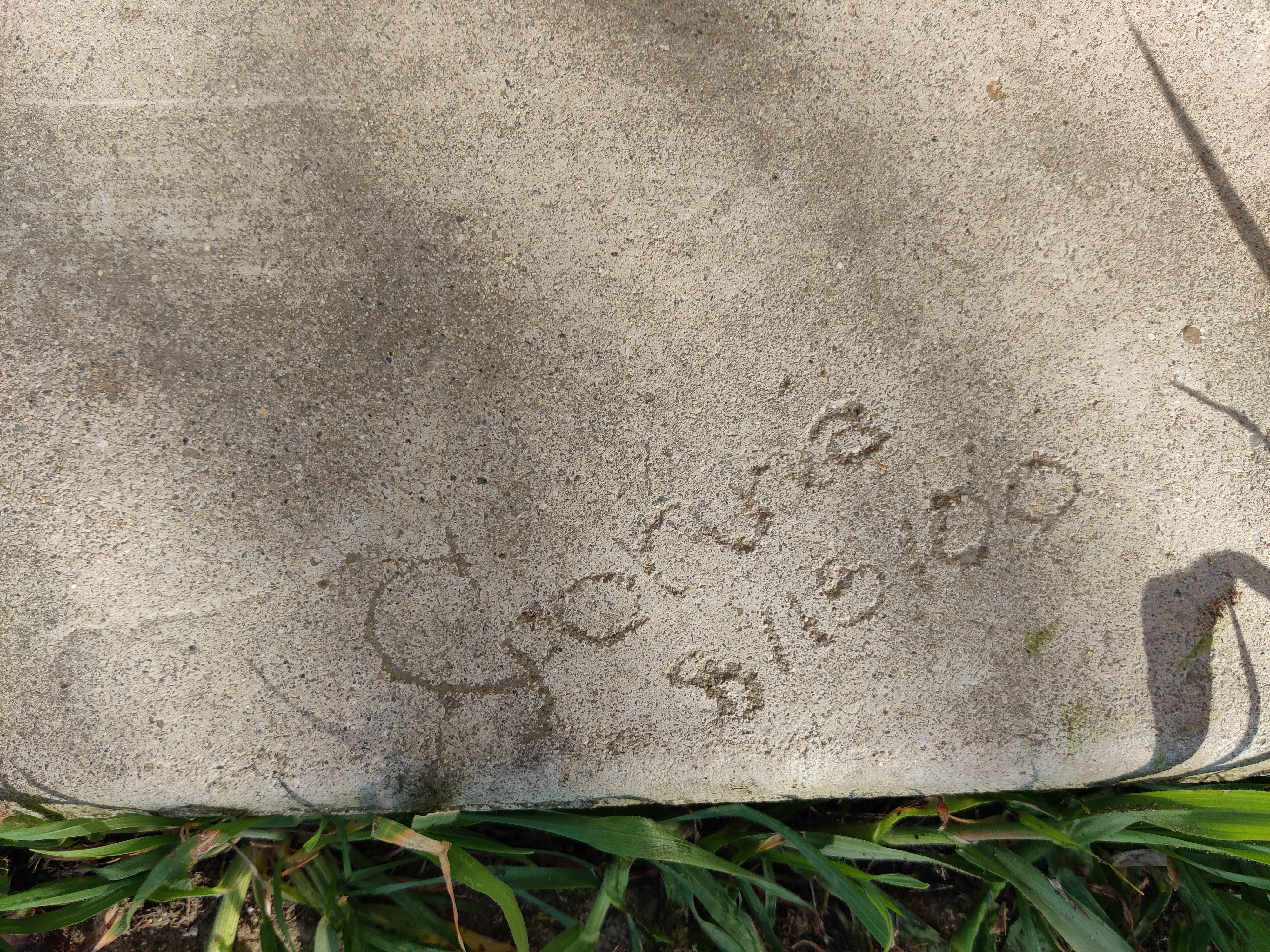 So now this house has belonged to us for over a decade. It settled into the earth a long time ago, so most of the floor boards do not squeak. It’s small, but cozy. It’s made out of brick, so it’s strong and lasting. It’s been the place for a number of birthday celebrations, parties with friends, and wonderful family dinners. It has stoically accepted the crayon and marker drawings of my children. These walls are now 70 years old and have lovingly housed at least three families. We will probably stay in this house until we retire many years from now to somewhere along the coast. It has been (and continues to be) a loving home for our family.

As always, thanks for stopping by. ❤

One thought on “House History”