I’ve been to the Hawaiian islands twice so far. The first time I went was to the small and relaxing island of Molokai with my mother a long time ago. Unfortunately, I have no photos from that trip to share with you all. Molokai is pretty and definitely less crowded than the other more popular islands. It’s a very laid back island. In fact, we saw signs all around, especially on the sides of the road, stating, “Aloha! Slow down! You’re in Molokai!”

My husband and I took a week-long vacation to Hawaii some years ago, sort of as a second honeymoon before we had any children. We went to the “Big Island” and thought it was so beautiful! The Hawaiian sunshine is fierce, however, and I got terribly sunburned the first day. Apparently, my SPF 35 sun block wasn’t strong enough for me, and so we had to buy sun block with SPF 70!

The people of Hawaii are so nice! Both on Molokai and Hawaii, everyone is just so friendly and kind. They always have a smile and seem to be loving life. I think if I lived in such paradise, I’d be the same way! Hope you enjoy my photos and adventures! 🙂 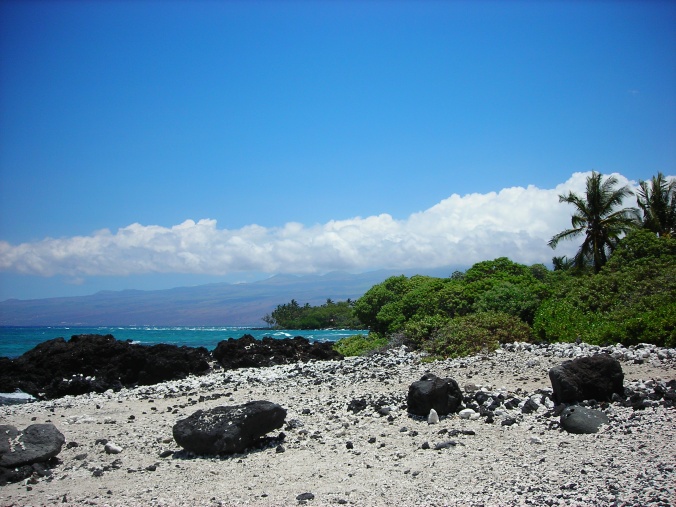 So let’s begin with this gorgeous view! This photo was taken at Holoholokai Beach along the north western coast of Hawaii. It has a mix of black volcanic rock and pieces of white coral on the beach. The beach is rather rocky, so it wasn’t a good place for swimming or snorkeling, but it sure looks pretty. 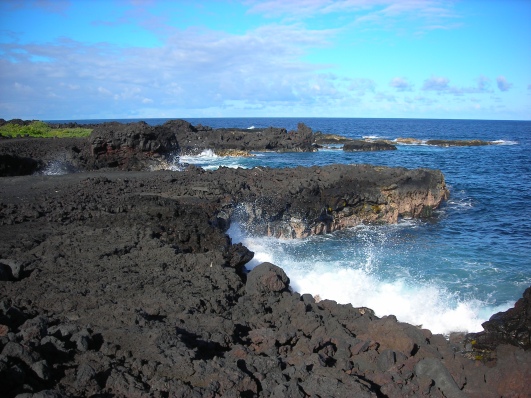 Here are some really neat black volcanic rock formations and cliffs near the Kalapana coast. Look at how dazzling blue the sky and ocean appear! The ocean’s deep color made me think of sapphires. It was like this all around the entire island. 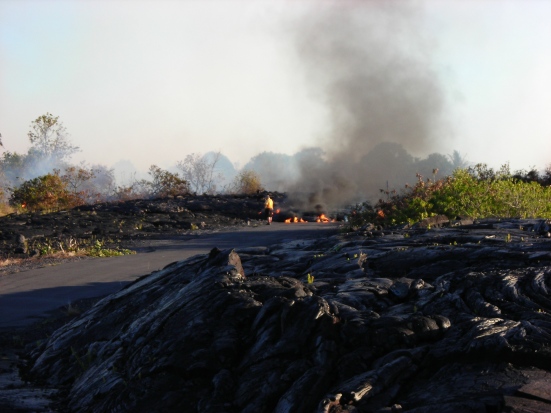 This is also near Kalapana and it was where the volcanic eruption was slowly flowing at that time. We were able to drive to it, park, and then walk to a barricade and watch. The lava crept at a pace of one foot per minute, so we weren’t in any danger. In all honesty, looking at the old layers of lava (pahoehoe) all around us was much more interesting. Everything is so black, lumpy, and lifeless…and then you look closer and see tiny seedlings growing within the cracks of the hardened lava rock. 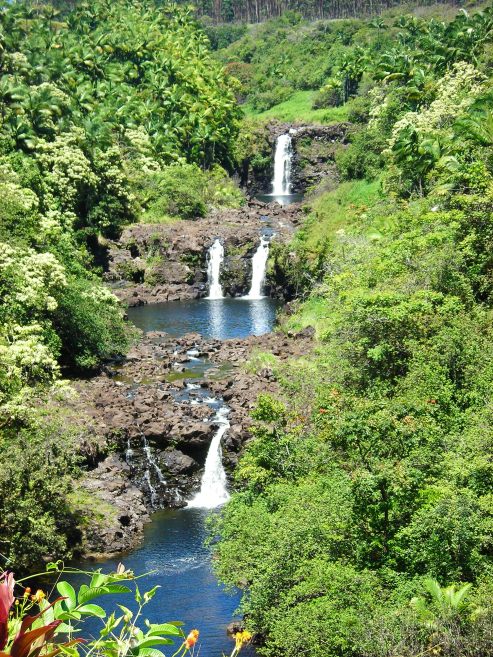 This is Umauma Falls. It’s a three-tiered waterfall that looks so much more impressive in real life. While the falls really aren’t very tall, they look rather beautiful with their shimmering pools of water below each.

Snorkeling was so amazing! We went snorkeling in two different spots on the island, and we really liked Honaunau Bay. The water was so clear and warm, and we saw so many colorful fish and fragile coral. Our waterproof camera definitely came in handy! (Although to be honest, we’ve rarely used it since Hawaii.) It was amazing to swim with the fishes, but I almost swam right into this sea turtle! I was looking down at the fish and when I looked back up, there it was right it front of me! Yikes! The Hawaiian word for turtle is honu. They’re protected by law, so I took this photo and got out of its way.

🍹 We aren’t really drinkers and don’t care much for the bar scene, but I’ve got to say that I had a Mai Tai at one of the restaurants and it was pretty darn good! My favorite meal was the fish tacos from Huli Sue’s, which is sadly no longer in business. Ramon got sick from a bucket of shrimp from some other restaurant, poor guy. We never did end up going to an official luau, but we did try different authentic island cuisine. The lau lau, kalua pig, and moco loco were all delicious, as was the huli huli chicken with grilled pineapple and the malasadas, which are Portuguese in origin. As for poi, I didn’t care for it that much.

Unfortunately, I have no foodie photos. Sorry, everyone. 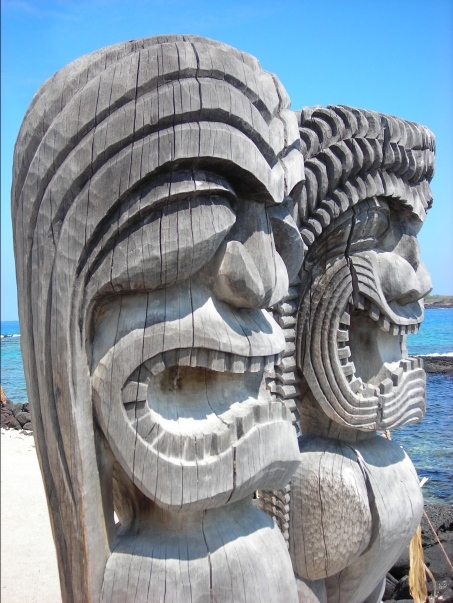 Check out these warriors! These wooden statues (ki’i) are found at Pu`uhonua O Honaunau, which is also known as the Place of Refuge. It was a safe sanctuary where Hawaiians who broke the kapu (ancient sacred laws) could go for protection given by the temple priests. 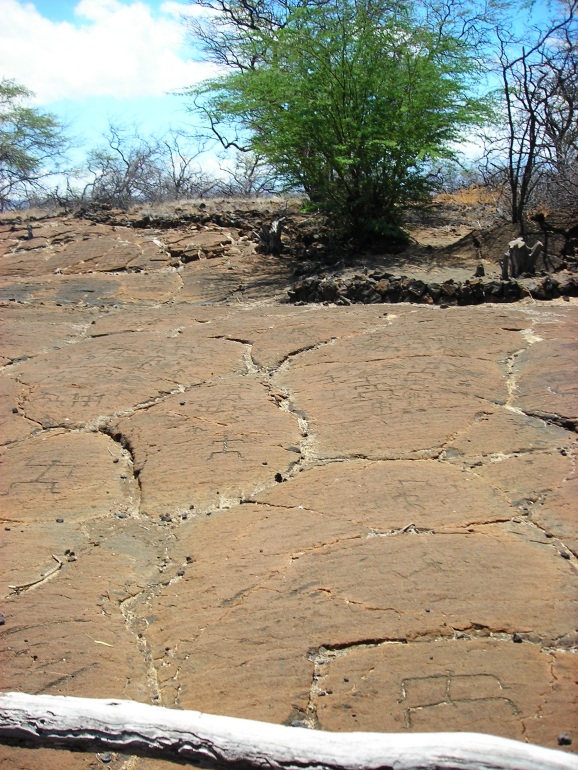 Many of them are difficult to see, but if you look closely, you’ll notice some carved figures in the rocks. These can be found at the Puako Petroglyph Archaeological Park. There are over 3000 of them, dating back to 1000 AD. You access this area by parking by the Holoholokai Beach, and then hiking a little over a mile (round-trip) along the Malama Trail, through some surprisingly dry parts of Hawaii. 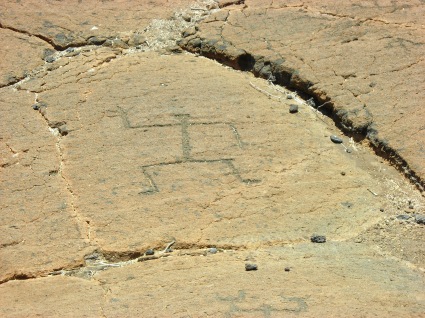 Here is a close-up of one of the petroglyphs. This image, or variations of it, is found all over the archaeological site. 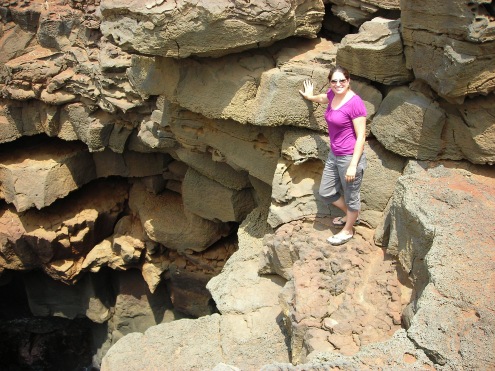 Here I am at a cool rock formation near an underwater cave at Ka Lae, which is the southern tip of the island, and also happens to be the southernmost point of the United States. I believe this area is also called the Edge of the World. 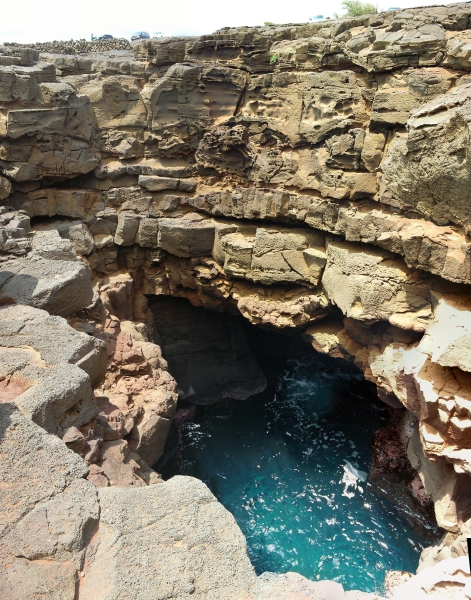 As awesome as this underwater cave is, it isn’t the main attraction at Ka Lae. It’s the cliff diving! Both my husband and I had absolutely no intention of jumping! 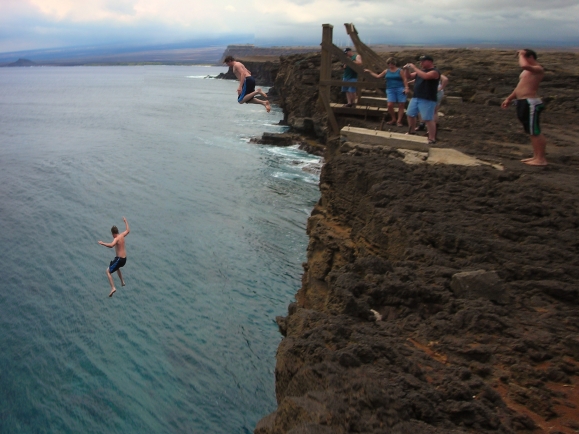 Here are a few photos that my husband stitched together into one photo, showing a guy cliff diving. I’m all for thrill seeking, I’ve been sky diving after all, but this just looked too scary. No thanks!

So by the time our Hawaiian vacation had come to an end, we had been around the entire island, including the interior where we saw Mauna Loa in the distance (the largest active volcano on Earth) and the Kilauea Caldera at Hawaii Volcanoes National Park, toured the Hawaii Tropical Botanical Garden, checked out some animals at the Pana’ewa Rainforest Zoo, admired the King Kamehameha statue, sampled some yummies at the Mauna Loa Macadamia Nut Company, and strolled along a huge farmer’s market/street fair in Kokua Kailua. It was a fantastic vacation!

Mahalo! Thanks for stopping by! ❤

One thought on “Travel Adventures: Hawaii”