I did my first half marathon this past Sunday. Another thing to check off my bucket list! In a nutshell, the early morning was cold, my legs began to ache at around mile 9, and I finished just slightly better than I had hoped, although still pretty slow. There were a few great signs along the way. I think the best one I saw said, “I woke up early, too! Just to make this sign!” My trusty MP3 player kept me company along the many, long miles and I finished the race to Joan Jett’s “Bad Reputation.” How amusing it was to see women running their races in full makeup, and I think one woman was even wearing false eyelashes! I got passed up by runners who were clearly much older than me, but I figured that it made them feel good to pass up someone young. All was balanced in the world.

This is going to sound odd, but the best part of the race wasn’t crossing the finish line, it was when I got my finisher’s medal. I had crossed the finish line (Running, not crawling!) and with fatigued legs, made my way forward to get my hard-earned medal. All sorts of volunteers were doing the honors of handing them out, but then someone caught my eye. There was this old, Asian woman, a good six to eight inches shorter than me, and she had the medals all tangled up on her arm. Something about her seemed so genuine, that I skirted around the other volunteers with shiny, new medals in their outstretched hands, and headed straight toward her.

She seemed embarrassed as she tried to detach one of the medals for me and she sheepishly apologized. I told her it was no problem at all, and she got one loose from the bunch. I bent my head down graciously, and as she placed it over my head, I couldn’t help but smile. Somehow, it was as if this old woman was bestowing her wisdom upon me. It was as if all her years of life were brilliantly radiating out of her. It was as if she was blessing me with joy and warmth and grace. I don’t know if she ever ran a race in her entire life, but in those few seconds, we had some sort of spiritual connection. In those few seconds, it felt like she somehow lived vicariously through me, and I was beyond honored and humbled to have shared in that wondrous joy with her.

I actually got a little teary eyed at that very moment. It made me think of life, of loss, of pain, of love, of courage, of possibilities, of coincidences, of breathing, of my late brother, of sunshine, of beauty…of just so many things and all at once. From months of training, to finally crossing the finish line, it was the most perfect moment of this entire half marathon experience. 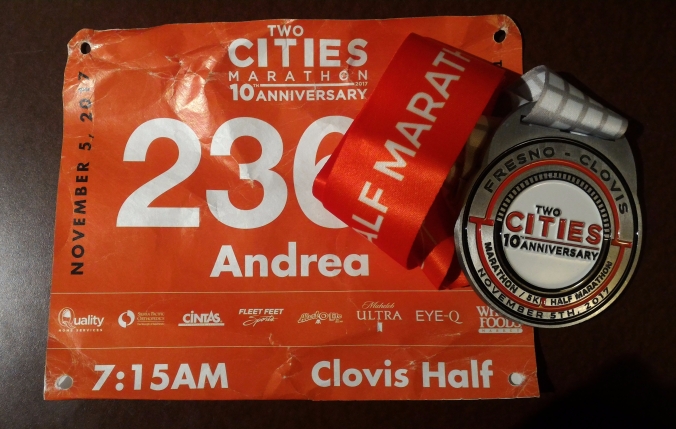 My race bib and finisher’s medal.

4 thoughts on “Half Marathon, Full Heart”

First shot done! ✅💪🏻💘 #vaccinated
I love Instagram's filters making me look fresh-faced and not tired at all! LOL 😍
Merry Christmas, Feliz Natal, and Feliz Navidad from us to you! ⛄🎅🏻🎄🎁❄️
I have such awesome co-workers! 🎄⛄🎅🏻💌
Happy Thanksgiving from our family to yours! 🦃🥧🥂
Look at what got delivered yesterday! The lid has the Wonder Woman emblem and star on it. Smells sort of fruity and spicy. So awesome!